Don’t you love the feeling of walking into a record store you’ve never seen before? It feels like visiting an entirely new planet that speaks the same universal language—music.

Here are our favorite record stores in Northern and Western Europe, and what makes each one so special to us. 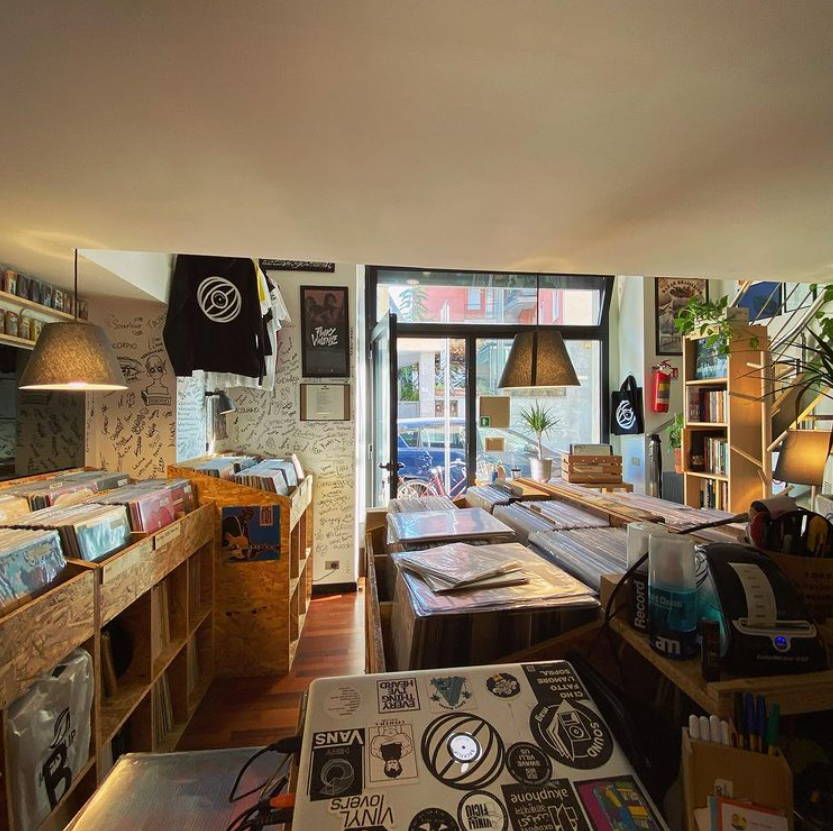 Backflip Records is nestled in the metropolis of Milan, Italy, the fashion capital of the world and home of some of Da Vinci’s most famous works. The music mecca is owned and operated by Federica Wallace, former sound engineer of the Pergola Tribe dancehall of the 1990s. Founded in 2015, Backflip Records has become a cultural cornerstone in a city that sets the bar for fashion and exotica worldwide.

From 1990 to 2009, Pergola Tribe served a community of passionate creatives who came together to dance in the heart of Milan’s Isola district. Alongside business partner Giovanni Taverna, Federica inspires a communal feeling of musical connection through a variety of live DJ events hosted by Backflip Records. From lively jungle anthems to rare Latin gems, Backflip Records has the widest selection of beat-driven cuts in Italy. 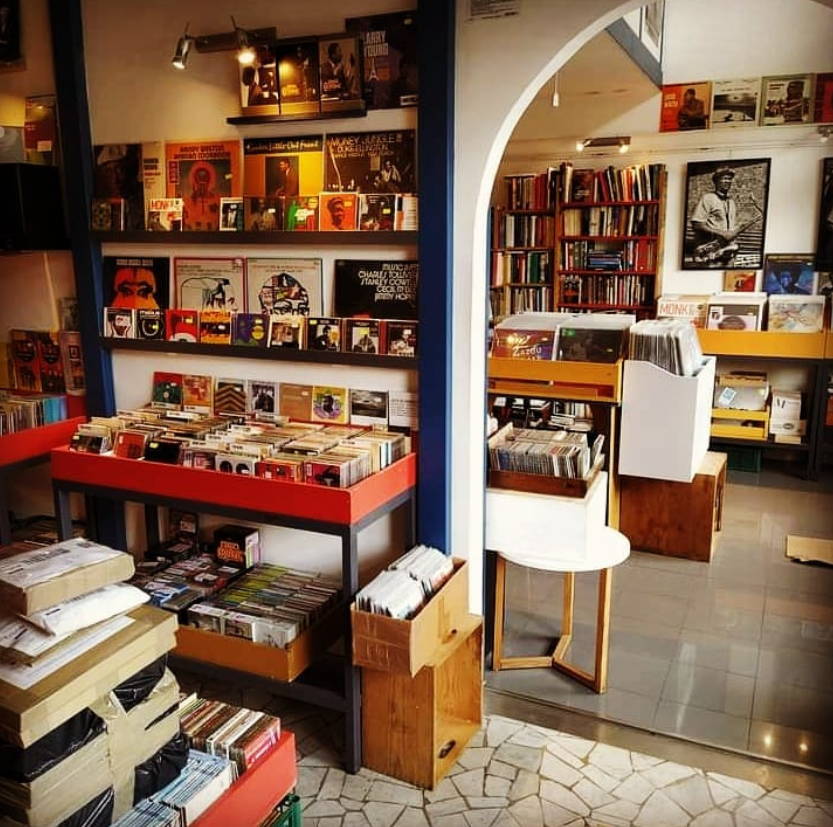 Jazz enthusiasts take note—Blutopia is the place to be. For many, Blutopia is more than just a record shop. For those individuals, Blutopia serves as a meeting ground for musicians and fans to experience music in the heart of Pigneto, known as “Rome’s Brooklyn.”

The walls of Blutopia, shared by a vintage used book store, echo sounds of the forefathers of jazz. Founded by a group of business partners, including Italian percussionist Fabrizio Spera, in 2011, Bluetopia transforms its storefront into an intimate music hall for live concerts and other special events at night. These events are warm, friendly rituals that bring the appreciation of music full-circle...with plenty of wine. Hey, when in Rome! 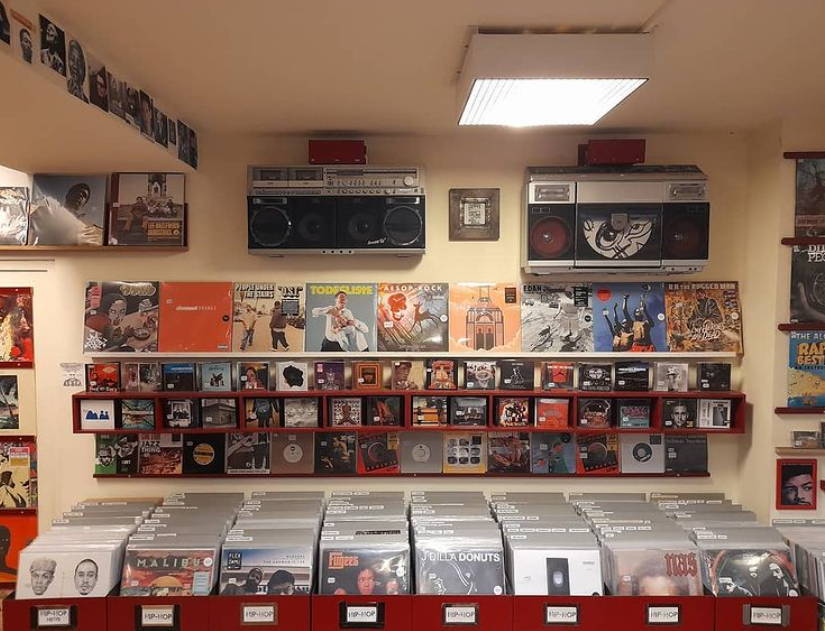 In Hamburg, music lovers flock to Groove City, one of the most iconic record stores in Europe. CNN even recognized it as one of the top 10 record stores in the world. Since 1995, shop owner Marga Glanz has been offering an impressive selection of beats that range from electro to soul.

Mind the MF DOOM statuette on your way in. Groove City is well-known for its curated collection of hip-hop, making it a bucket-list shop for purists itching for a unique crate-digging experience. The shop also sells a trendy collection of sneakers and other attire to match. Enjoy your time, but don’t bump into the massive Groove City boombox replica on your way out. 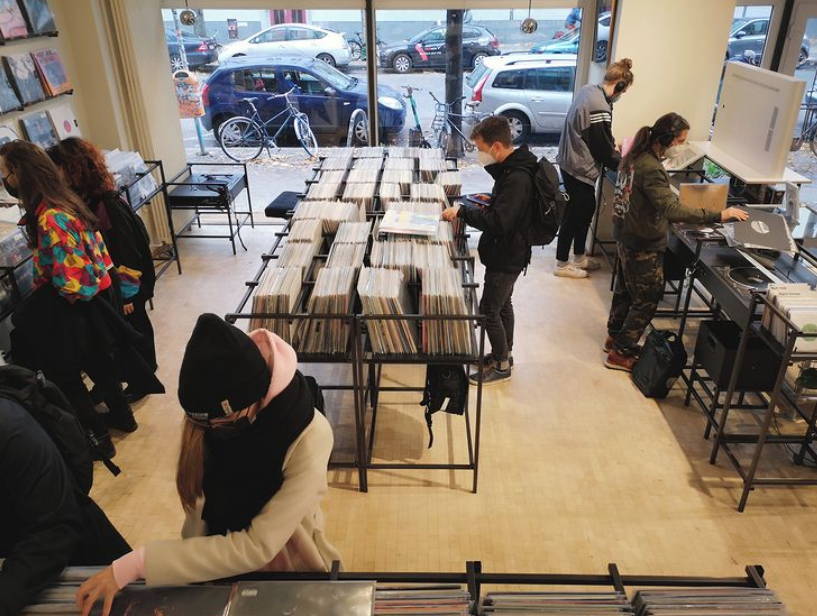 HHV Records was born from the golden era of late ‘90s hip-hop. At the time, hip-hop records were hard to come by in Berlin—shipping times and customs restrictions made it even worse. Founder Thomas Ulrich decided to open a record store that caters to people who want to enjoy hip-hop the classic way—on wax.

A few years after opening, HHV Records launched its online store and jumped into the urban apparel game in 2002. Today, HHV Records remains a popular resource for record collectors, DJs and urban trendsetters.

HHV Records is rooted in all things hip-hop, but the selection includes a lot of different genres. You’ll find German rap, reggae, afro, electro, disco, pop and rock—we’re still just scratching the surface. Speaking of scratching, HHV also stocks the best analog and digital equipment for DJs. Walking through the HHV universe is a must for anyone who loves hip-hop or street culture. 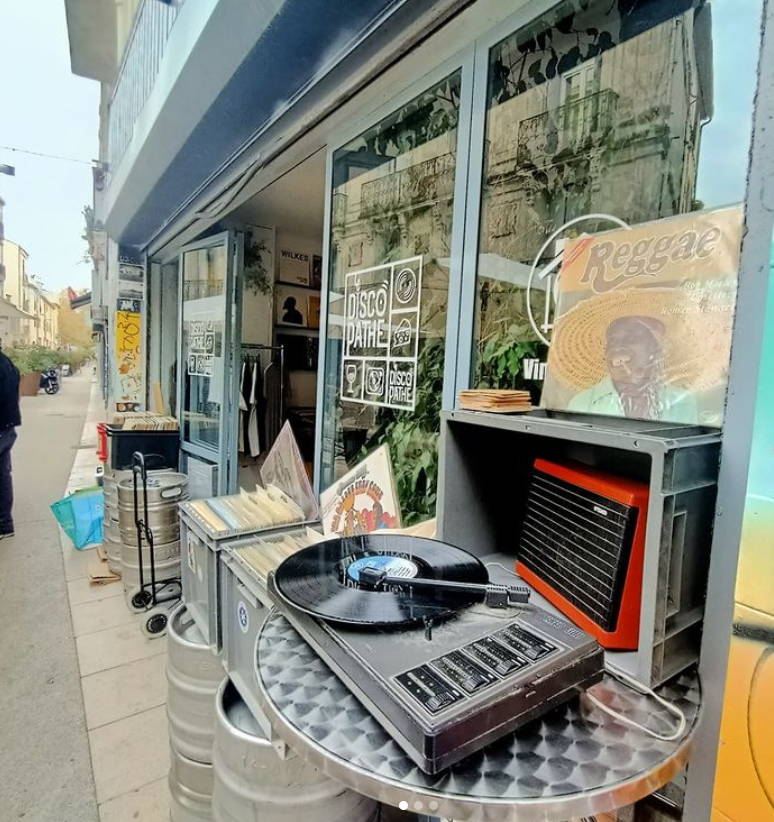 A bar located within a boutique record store? Sign us up! Le Discopathe might be one of the coolest spots in the already cool city in the south of France, Montpellier. Local craft beer and vinyl records collide in a home-grown atmosphere that you’ll want to visit every week.

Le Discopathe carries a good selection of reissues and new releases, but they specialize in world music—check out the reggae and Latin bins. The shop also supports its community by highlighting local businesses, micro record labels and independent artists. 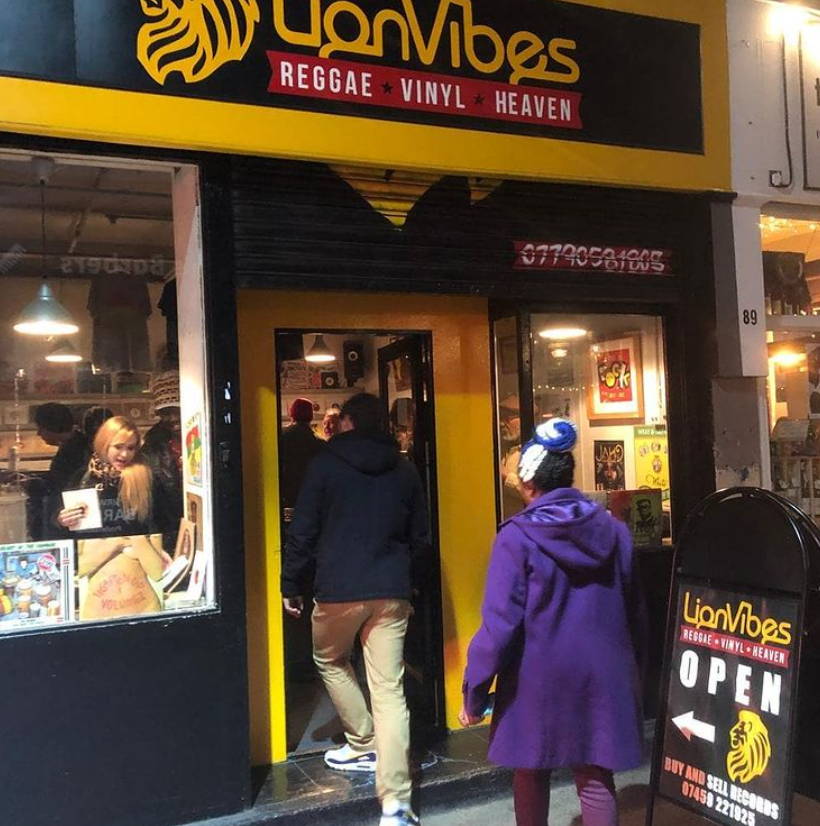 In 1997, Matt Downs turned a small market stall into the most established retailer of original reggae in the world—Lion Vibes. The shop was inspired by the need for more variety in Brixton’s musical landscape. Since opening its current storefront in 2016, Lion Vibes has made a significant impact on the city of Brixton.

They call it “Reggae record heaven” for a reason. Lion Vibes carries new and vintage reggae records from prominent labels like Tuff Gong, Dread, Trojan and Horus. Fans can purchase records online or at their physical store. 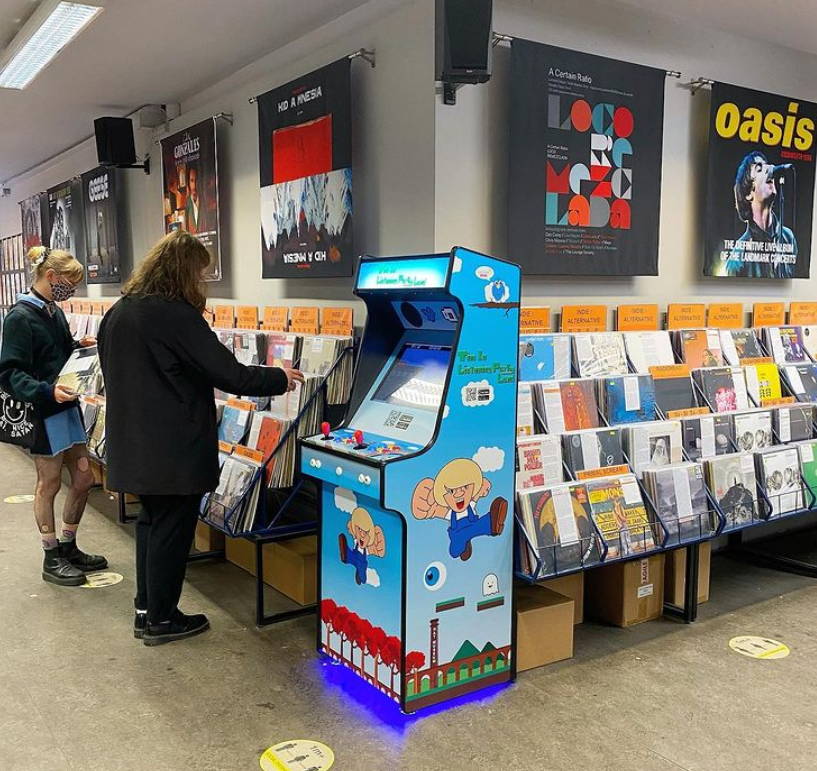 Picture this: You travel back in time to 1978, a year after Talking Heads released “Psycho Killer.” It’s a pivotal era for post-punk. New bands and landmark releases are flourishing, and the hottest new record store just opened up in Manchester—enter Piccadilly Records.

Piccadilly Records is located in the Northwest corner of Manchester, selling a range of alternative rock, indie, funk, house and avant garde. The shop is recognized by The Guardian, Observer and The Independent as one of the best record stores in the UK. 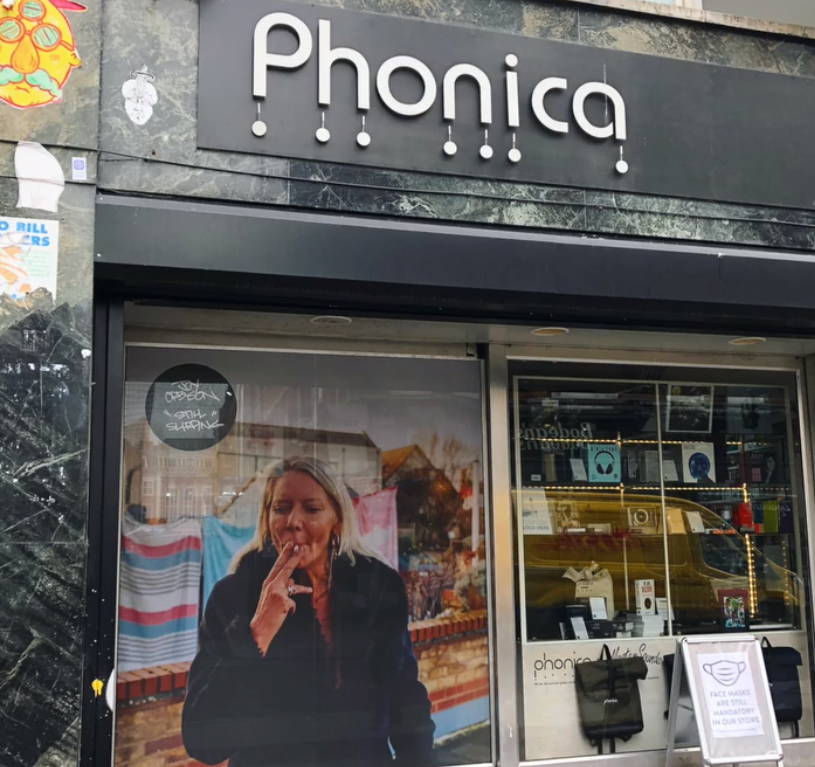 Phonica Records opened when many independent record stores were closing their doors. It was 2003, and vinyl sales were in decline. Despite the challenges, Phonica Records has grown into a formidable ally of London’s club scene. The shop is known for its friendly staff, knowledgeable background and exciting series of in-store events.

Phonica Records sells a broad collection of dance music, from soul to techno. Aside from being one of London’s favorites, several renowned DJs visit the shop to stock up on the tools of the trade—turntables, mixers, cartridges and more. 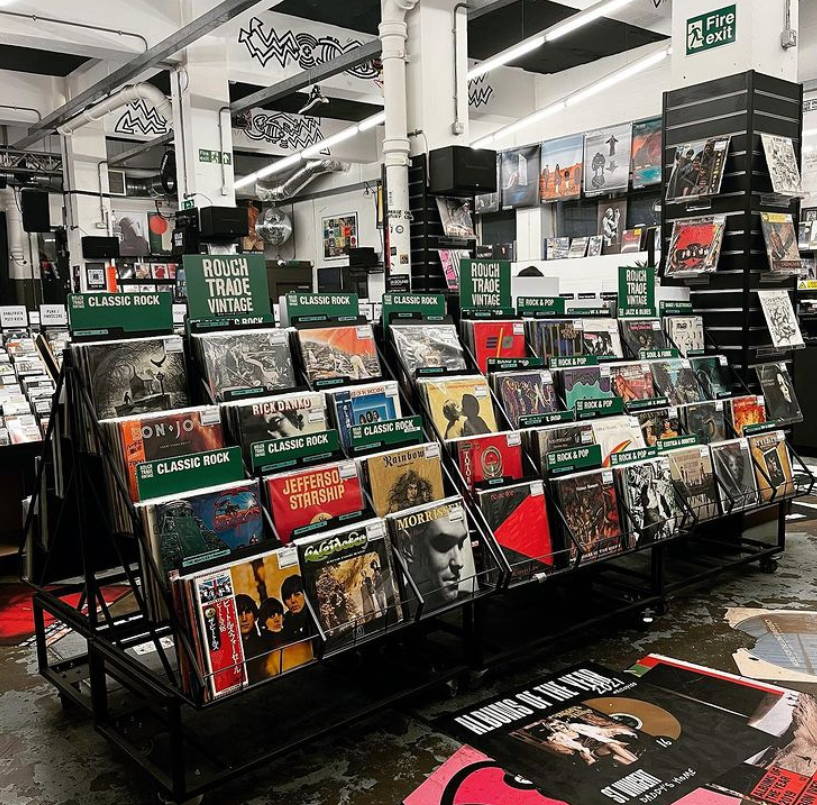 According to Rough Trade, the shop opened “on the doorstep of punk.” We couldn’t say it better ourselves. Rough Trade has multiple locations in the UK and US, but the most iconic shop is in West London. Rough Trade Records, the legendary record label, grew from the shop’s success and has supported a roster of famous artists including Alabama Shakes, The Strokes, The Decemberists, Arcade Fire and Warpaint.

Rough Trade’s legacy is intertwined with the progression of punk music, but the shop evolved into a beacon that celebrates all music genres. If you’re an avid record collector, shopping at Rough Trade is a right of passage that should be on your list. What are you waiting for? Dig in! 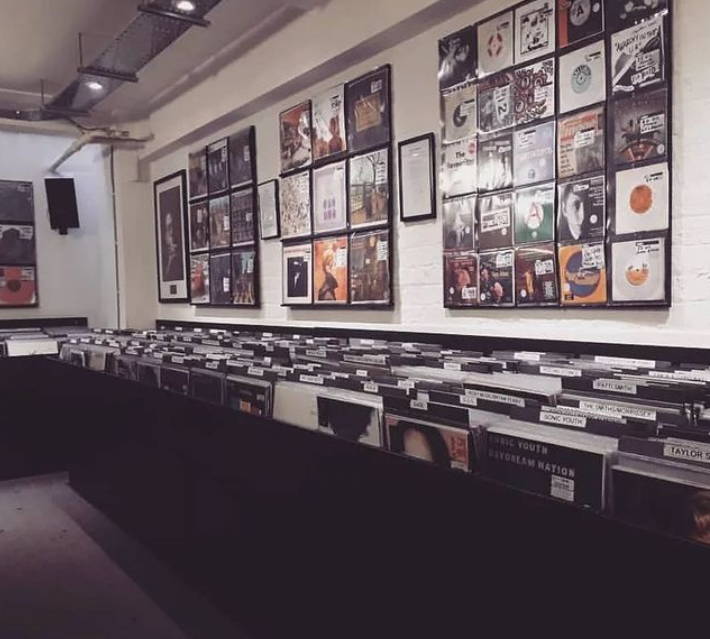 Sister Ray’s wild history began in 1989. The shop was named after “Sister Ray” by The Velvet Underground and was the first record store to ever sell Arctic Monkeys’ debut EP, Five Minutes with Arctic Monkeys. Want another fun fact? Sister Ray’s Berwick Street storefront can be seen on the cover of Oasis’ album, (What’s the Story) Morning Glory?

The cool background is only the beginning. Sister Ray is a fantastic record store in the Soho area. You can always expect to hear something fresh when you walk in, whether it’s rock, jazz or afro.

We highly recommend checking out some of these shops for a great record shopping experience. If you’re new to vinyl, choosing a quality record player is your first step. Check out our Stir It Up Turntables to begin your journey!